I had written previous about The Arcade Vaults in Cardiff and the game design competition that they were running with Sega Amusements. After four weeks of development, my game Sticky Gumball was entered and my son and I travelled to Cardiff for the competition results.

The best thing about the visit was standing in a room watching people play my game whilst discussing with the players about how it was made and the inspiration behind the idea. At one point it got really competitive between players and it was so nice to see people enjoying my game and the other entries. 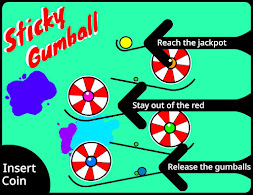 So to the results! The guy from Sega announced the top three winning games and I was so flattered that Sticky Gumball achieved third place, with my friend Rich being awarded second. First place went to a great game I have played quite a bit already and deserved to win, Ticket Tower.

The game dev community there was so welcoming, friendly bunch and I hope to keep conversations flowing. Hello to you!

You can play Sticky Gumball and the other entries here.