My Zoltar build is proving a great deal of fun and amusement and whilst it's not complete just yet, he has been generating a great deal on interest. I've been thinking about how to make my Zoltar cabinet more accessible to people and I think I've come up with a way for people to contact him over Twitter.

Here's a short video of where the project is currently at.

In order for Zoltar to respond to people's fortune requests, I first needed to load him up with some words of wisdom. I found a book of his sayings online and got to work recording them in a spreadsheet, so that I had them stored in a central location. 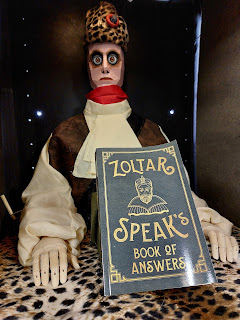 The next step was to create a Twitter account for the Zoltar cabinet and was surprised to see that @ZoltarCabinet hadn't been taken, so I snapped it up. The idea is that when Zoltar receives a Tweet to his account, he will choose a random saying from the spreadsheet list and respond back automatically. This was achieved using a Twitter bot service called Cheap Bots, Done Quick.

If you're on Twitter, you can drop my Zoltar cabinet a tweet on @ZoltarCabinet where he will respond with some of his words of wisdom. Zoltar's responses may take a few minutes to get back to you though but this proof of concept idea is working well so far, despite being held together with sticky tape.