It has taken months of hard work, both sat at a computer screen and in the workshop but the community payphone hacking project is now complete. It's been a huge amount of fun, despite it being a steep learning curve in integrating with old technology but I now have a working model of a hacked payphone and it's a delight, if not a relief to finally get to this point.

It still holds true to the main point detailed in previous posts but as the project has evolved so have the features it now offers. The main idea behind the #RecodeThePhone project still remains, to save the disappearing phone boxes by repurposing the payphones that reside within them, whilst offering free calls, mailbox facilities and access to helplines to the people who need them.

The #RecodeThePhone operating system now offers the following options:
I have two favourite options, the first is the Dial-a-Disc when the phone will go off and retrieve a random internet radio station from anywhere in the world. Last night is chose a station playing Japanese jazz. The second option that I've really enjoyed in the Apology Line. Here, users can confess anonymously to the things they have done and seek forgiveness. They all get stored and can be listened to randomly, one at a time. Once the project gets rolling, it would be nice to collate them all somehow

It was these two features in particular that led me down the route of developing the #RecordThePhone OS for mobile devices. This will give more people the chance to play around with a number of the options whilst also giving them the ingredients to make their own payphone installation. Just by purchasing a very cheap Skype handset, this will automatically improve the app experience on your phone. 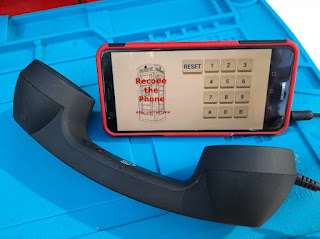 What Have I Learnt?

I always learn from my projects, and this one is no exception. The main thing that struck me is that as builds get bigger and more complicated, organisation is the key as timescales are so much longer as a result. I have also learnt that there is a huge demand for old, decommissioned BT payphones and I've been trying to work out why. I think they're incredibly interesting, just taking a part mine reveals some really clever mechanics and design - the locking mechanism alone is a thing of beauty, but I think the demand is down to people wanting to own a piece of history. As a result, I'm now looking out how to cast the parts of mine with a view to producing replicas. That, along with some basic electronics to get things to light up and ring etc, I think is a winning combination.

It would be nice to do something with the LCD screen in the payphone. As it's situated next to the coin slot, it makes sense to have these two features work together. As the community phone gets out and about, a good idea would be to get the phone collecting donations for charity and there is ample space in the box to allow for something bespoke to feature behind the LCD screen to tempt users to deposit coins in the slot. 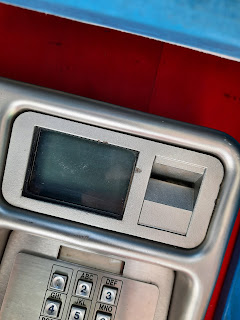 The project has taken many paths over the many months. Originally it was this video below that caught my attention last year and it would be nice to have the current build link back to this original idea of broadcasting a pirate radio.
The payphone has a Follow On Call button that would have allowed the user to make another call if they still had credit left. This would make the perfect button to push to start broadcasting. 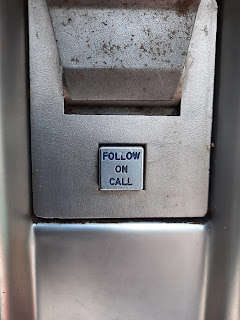 Finally, I love the idea of providing kits to allow people to start building their own. I am in the process of designing 3d models of smartphone and retro receiver stands for people to print out and use as a starting point for their own #RecordThePhone projects.