The great rewrite! The decision to rewrite the game has allowed me to plan the structure better as I'm able to cherry pick everything that was good in version 1 and better plan in this version. The rewrite has also resulted in a better project plan. For this update I am planning on concentrating on the following:

IKEA aesthetics
Tile delivery system
Wiping the board clean
Game save
I put together a random selection of shapes with the intention of evolving them into proper buildings later on. Once these were in place a basic tile delivery system was written that presents the player with a single item tile at a time and does this in a random way. I am dreading revisiting the logic I penned in the notebook for this system, it is what broke everything in version 1 and forced this rewrite as a result.

Despite it only being a basic prototype, it is strangely satisfying just placing the random shapes onto the board. I have been able to plan a better method of recording each piece placed on the board, with each piece's ID stored in a single array. This array is in constant use as the board is continually scanned, allowing the pieces to be better managed in real time. With everything managed as a single array, I plan on utilising this when building a method of saving and loading player-built maps. Loading in an array, the board scan function can then pick it up and rebuild the board. It is also the same function that handles the resetting of the board too. One function taking on three roles - probably the most efficient thing I've ever written. 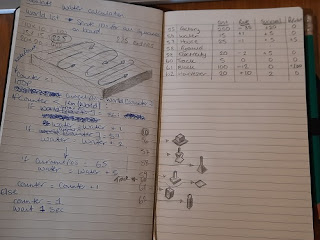 The tiles are currently delivered on a random basis and so I've cautiously started to pen the algorithm that will deliver each tile based on certain criteria. It is this that is going to take the most time and one that will require constant tweaking, so the framework for this will need to allow for corrections to be made easily. Anyway, here's the first video devlog covering the project so far.