I have a rough concept of the game. Thoughts now turn to the environment and map the player will be playing in. I've played a great many settlement building games lately, for research purposes you understand ;) (Try out Dorfromanik by the way) and I think playing the game in an isometric view works really well and is a nice nod to the old world building games that I used to play. I've also been giving some consideration to how the player will journey through the map and have gone for a simple 2x2 grid system to start with, with players unlocking new areas of the map as they progress through the game. 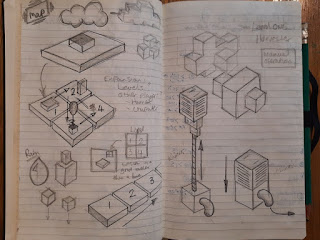 I had an idea for the initial cloud harvester the player has access to at the start of the game. This will raise its cloud catcher up into the air before retracting it to decanter the collected moisture. From here on in I am going to use simple place holders as the game evolves to make sure the mechanics are working before investing any real time in building aesthetics. I have track building and cloud harvester placement (sort of) working with a few basic rules whereby buildings can only be placed alongside a dirt track. Idea - What if the dirt track was a railway track, collecting water from the harvesters and depositing it at a central water station?

The main aim of the game will be to keep alive and expand a population through careful management of settlements and water harvesting. I've been trying to work out the mechanics of the game and how each building depends on previous buildings being built. Different combinations of buildings in a settlement will affect the water harvesting rate, the survival rate of colony and how quickly settlement technology can be advanced. This is a really interesting insight into how similar building games are produced and I have a great appreciation for them as a result. 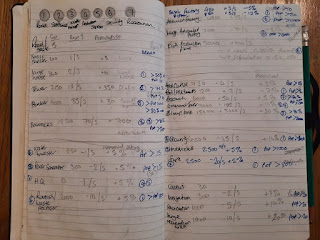 Taking inspiration from the other games I've been playing, I think it would be a good idea to add another layer of complexity by restricting the use of some of the building blocks. Presenting the player with a single card at a time but doing it in a calculated way to ensure the game can continue play (and not offer a building card that cannot be played) would be a great idea to consider later on.