This is the start of a dev log of my game Cloud Storage. A settlement building simulation set in a dry, desert world where water is the last remaining natural resource. Harvest the moisture locked in the clouds to upgrade and trade with other players to advance your settlement and increase your chances of survival.

Inspiration for games come in many forms, I usually use the weekly game jams to help get the creative gears moving. This is great for short blasts of game making but for a longer build I needed to look elsewhere and it wasn't long before something of interest came my way. I'm not sure how I came across it and it took me a while to track it down again but this short video of an animation really got me thinking. I love the idea of some planes fighting for resources whilst others are trying to better the situation. Wouldn't it be great to include similar dilemmas and situations in a game of survival.

To the sketchbook! There is always a slight sense of embarrassment when I first start sketching out a game idea and I'm not sure why this is. Maybe I'm comparing my doodles to other developers who have shared some of their sketchbook pages and admired the quality of their art even in their early stages. One thing's for sure though, everybody has to start somewhere, including me. Below are some of the initial sketches I made for the game as I looked at putting together a game set in a world where water is the most valuable commodity with the player harvesting moisture from passing clouds in order to survive and support an expanding population. 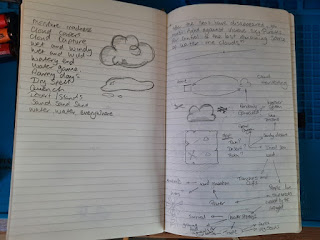 The dynamics of how someone in dry, desert world interacts and survives in such a climate. Trading with NPCs or other online players is an idea that really appeals and one that is worth exploring later on. 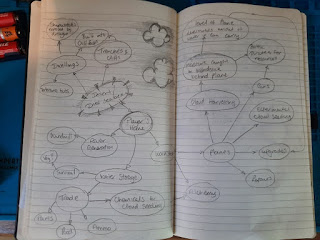 I initially thought about generating an infinite map for the player to level up and explore. The sketching out of this idea has made me realise that this maybe a little ambitious. This way of generating a random, infinite world that was the same on every load took me down some interesting avenues, including sitting down with a couple of maths teachers in order to got through how to generate such a thing. I was going to try and use the same mechanic for the weather system. 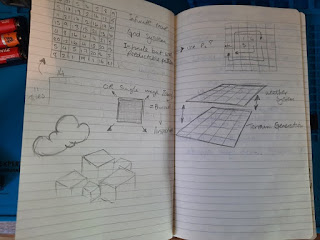 Level progression will be done through upgrading the player's technology in order to farm moisture better. For the basic levels, technology is operated manually with incentives to spend valuable currency on upgrading to automation, freeing up time for the user to explore the desert world. Moisture can be traded for parts and goods. I really like the idea of a messaging system between players in the form of a mail carrying blimp. 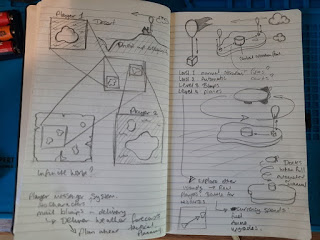