August 23, 2020
Have you ever wanted to start your own radio station? For a number of years, I have. Even from an early age I've always been fascinated with radio and this is probably why so many of my projects are radio-based.

My most recent project is my pop-up pirate radio box that's designed to serve two purposes. The first will be to stream my broadcasts online using Anchor (https://anchor.fm) and there are really easy to follow tutorials on YouTube if you wish to give it a go yourself. Secondly it will broadcast over FM with the help of a series of modified in-car FM transmitters (my video tutorial can be found here) relaying the online stream of the broadcast at various locations.

I have put together a short video on how the pop-up pirate box was built and what plans I have for it.


Now let's rewind a little bit to understand how I got here. The pirate box uses a similar set up to a previous radio beacon project of mine. At the heart of the FM beacon lies the Microbit, whose job it it to manage and help conserve power to the transmitter. Having a means to activate your transmitter on a schedule is a really useful feature and the conservation of power is a problem that can be solved in a variety of creative ways. I hunted around the usual places for inspiration on how to solve this problem and found a nice video. I love how the rig featured in the video below solves this problem via analogue means and is able to keep to a broadcasting schedule too. Such an inventive idea. Spot the cat exercise wheel in the background at 5m 55s! This project served as inspiration for the Microbit FM beacons.


Together with the power management of the Microbit and my modified transmitter hack, I have the means to broadcast on a schedule for prolonged periods of time over a range of about 600m after further tweaks.

It's worth noting that I could not have managed this project without this clearly written Instructable on motor control using the TIP120 transistor. This tutorial has helped me so many times over the years and I've used it again with activating this project's transmitter. Thank you!

Below is my circuit diagram to show how the FM beacon was constructed along with the simple code blocks that control the servo motor and FM transmitter. 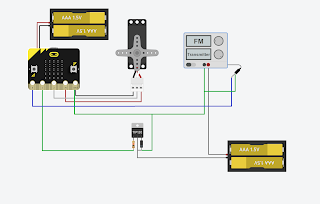 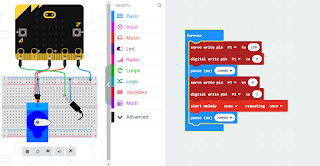 Built from cheap and salvaged materials, this was a challenging yet fun project to put together. Thoughts now turn to how best to use the radio rig. I rather like the idea of taking over unused public spaces such as telephone boxes and turning them into makeshift recording studios.
Broadcasting FM Transmitter Hack Microbit Pirate Radio TIP120 Transistor