I have previously built arcade cabinets from scratch and wanted to build another one now that I'm more familiar with the build process. However, after seeing the work of Small Change Arcade, I was inspired to build a miniature arcade machine instead and wondered how small could I go. This tabletop arcade with a Raspberry Pi Zero running Retropie was the result and I love it. 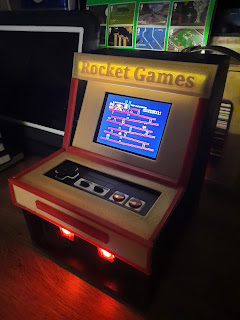 I also set myself an additional task of sourcing the materials from what I already had about the place in a bid to keep costs low and to prove that you can make good use of practically anything. As I was about to throw way some old IKEA CD drawers, I looked at one of them and could instantly see how this could be repurposed as a mini desktop arcade due to its shape.

Now I've never been very good at measuring things for projects accurately, nor am I very good at carpentry but that's never put me off before. I set about roughly cutting out the desired shape with a saw and was able to make good use of the leftovers by building the frame that would sit around the small screen. 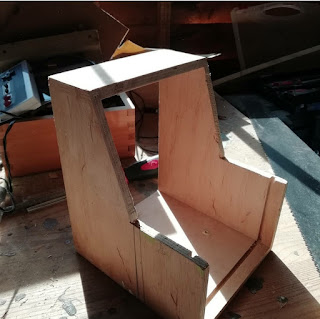 The screen I used for this build was a cheap car reversing monitor that I purchased from Amazon a number of years ago and it's still going strong today. The resolution isn't brilliant but it's perfect for what I had in mind for the retro tabletop arcade. In order to get the screen working with the Pi Zero though I had to purchase a cheap AV to HDMI converter. 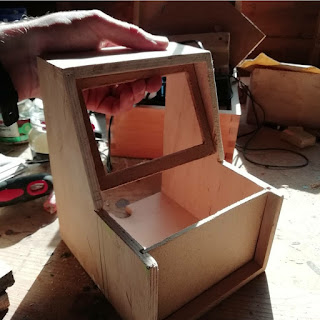 Due to my rather cavalier approach to accuracy, build components have a hard time of fitting togther nicely. However with this project the USB NES controller is the exact width of a CD case and so slotted into place perfectly. It was as if the two were made for each other, it fitted that well! 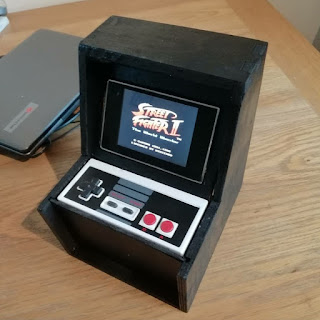 Once I had the frame built, the components safely housed inside and confirmed that everything was working as intended, it was time to 3d print the exterior. Again, I had no proper design in mind, I just started printing small parts out and built it up from there. One thing I did find useful about this process was the fact that the little mistakes I had made as a result of not measuring properly or poorly cutting the wood, I could hide really easily from view. 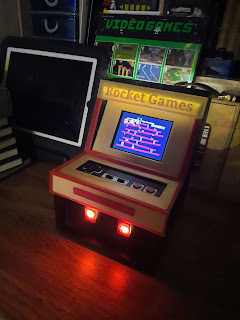 Still making it up as I go along and as a finishing touch to the build I managed to find some old broken Christmas lights that I'd clearly kept for a project like this to come along. Once I got a few of the LED lights working again I was able to drill a few holes in the wooden frame of the cabinet and have them illuminating parts of the 3d printed panels, including the miniature coin slots.

Whilst I am really pleased with the way this mini arcade turned out, there are a couple of things I would like to change in order to improve the build.

The first is to print a proper button and joystick panel to go over the USB NES controller. Whilst using the NES controller allows me to retain that retro feel of the project, it is a little awkward at times to use.

The Raspberry Pi Zero is at the heart of the build and this can be run off a battery pack. Unfortunately the screen I used cannot, it has to be plugged in and so it's not completely portable.

Finally, I would just love it if this could be made into a proper coin operated cabinet. I have the coin operator along with old 10 pence coins that we could use.