April 03, 2020
The thought of 3D printing has been something that has excited me for many years but I have yet to experience it properly for myself. With the school that I work at having temporarily closed I have borrowed their 3d printer to allow myself to get to know the printing process better.

Not know really where to start, I first visited Thingiverse, a website that allows people to share their creations as well as the design files to allow others to print their own too. I found a really nice model of a rocket that people can print and assemble. I thought it would be a great idea to get practice amending models instead of wading straight in and building something from the ground up.

My first thought turned to the old classic, Sketch Up but I found a much more simpler package that will allow you to design your own models for printing called Tinkercad. I was able to easily load the file obtained from Thingiverse and using the Tinkercad editor ad my own features. 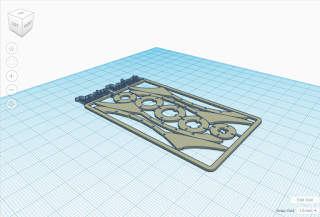 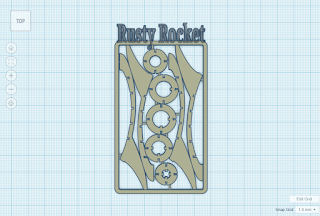 I was then able to import the file from Tinkercad into the Dremel Digilab 3D Slicer software that came with the printer. It was here that the model gets prepared for the next stage.

Next came the printing part. The printer I am using is a Dremel 3d40 which was a delight to set up, but I did have trouble levelling the build platform. However, after a quick scout around in the forums I found the solution. 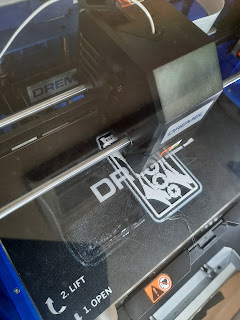 The one thing I really don't get on with is the part where you have to try an remove the finished print from the build platform. Scrapers are supplied but even so, it's a very nervous time as one false move could spell disaster for your printed model. I still haven't mastered this and I'm sure an easier process could be developed.

I'm very pleased to say that this particular print was removed without any problems and the overall quality of the print is pretty good. This would make a great little business card. 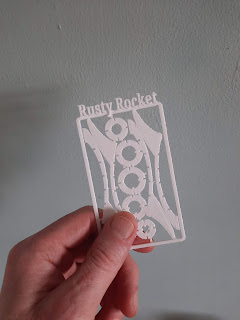 The rocket parts were removed without too much fuss, although I did snap one of the pieces being a little heavy handed. Assembling them was more difficult however and I think this is down to not taking the time to properly finish the print as it was still rather rough around the edges. Still, with a little persuasion and a couple of dabs of glue, I had a lovely little assembled rocket. 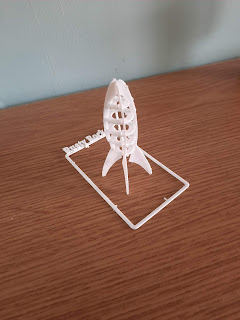