February 02, 2020
I think it's important to not exclude the younger generation when it comes to game development. As a teacher I am always amazed at the thoughts and ideas that come out of the heads of children and it's this level of creativity that so many independent game developers crave. Sure, we can master the countless software solutions out there that will allow us to produce truly incredible things but without an idea, without that spark of inspiration we are never going to fly.

So I set about proving a point. I recently entered a game jam competition, which is nothing new for me but this time I wanted to only use the software that children are taught in schools - Scratch and hopefully highlighting that it's not what the game is made with but it's the idea behind the concept that's important. I've made the Scratch blocks for my game Taco Cat available for all here.

For those who wish to skip the process of making the Taco Cat game and visit the game's page to read its feedback and to play it yourself, then click here.

There is a lot of truth behind the saying, "Keep It Simple Stupid" and when developing 2d pixelated games I like to create characters that contain bold colours and subtle animations. The Taco Cat character was based on a gif of the same name, drawn using the free Pixelart online and animated to give the appearance of walking.

I wanted to add something a little different to the game, so not only can you move the character through the level from left to right, you can toggle the gravity to vertically flip Taco Cat adding a new dimension of play to the level.

With any game, it's important that the player knows the rules and controls from the very beginning and Taco Cat is no exception - Simple controls for a simple game. I've found that with the majority of my games it's of huge benefit if the game opens with the controls and rules of the game. In this case the controls are displayed in the background of the first introductory level. 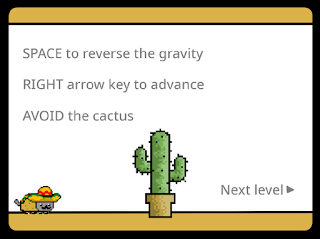 This is an interesting one and a topic that has countless books written about it. It's important that the player understands the rules of the game by completing the opening levels and ensuring that the player levels up quickly and easily at the start. 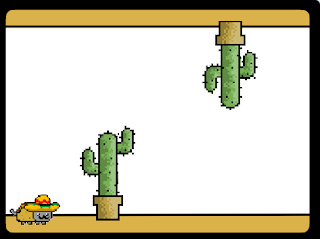 The levels in Taco Cat start with the easiest possible obstacle of all, a single cactus before increasing in number and complexity. It's important not to make the game too difficult too soon, the skill is finding that sweet spot that makes the game not too difficult but still poses a challenge. 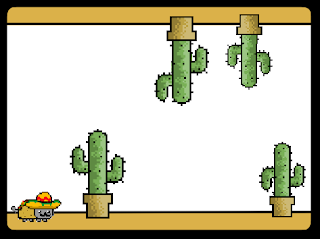 Thank you for getting this far through the post. Hopefully I've managed to highlight that if you have a great idea there will always be a tool out there to help you build on it. Just look at Taco Cat, built using Scratch and entered into a competition where it was pitched against some truly fantastic designers and their games.

I would definitely recommend making and entering a game in one of the many game jams that take place on a weekly basis. They're a great way to test your working process and they're such a great way of getting friendly and constructive feedback from the community. Here are a few game jam tips to get you started.