January 08, 2020
Salisbury is home to a number of great secondhand and house clearance places and recently whilst doing the rounds I came across this interesting homemade box comprising of an old Bakelite phone and working Morse key. 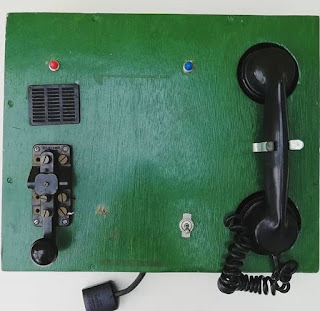 The most interesting feature of this find was that it came with a rather interesting phone connector, allowing the phone to hook into a telephone network similar to what would have been on army bases. As there are many army camps in the area, I'm guessing this was once made for a child living on one of these neighbouring bases. There was similar box in the shop, obviously they were built as a pair but unfortunately it was in such poor condition that i decided to just purchase the better of the two. 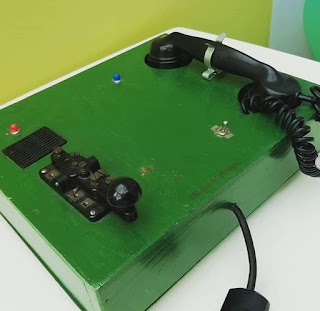 Just imagine living on an army base fifty years ago as a kid where yourself and a friend were kitted out with a communications box such as this. You could hook the contraption into the network and communicate with one another via voice or better still, Morse code. 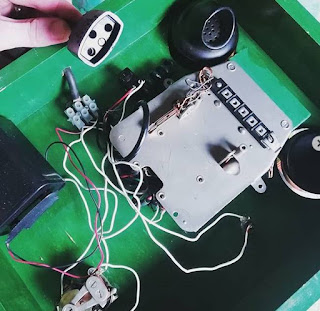 I wanted to bring this build into the 21st century by adding a few additional features of my own. I decided to first concentrate on the Morse key and built in a Morse code trainer comprising of a BBC Microbit. By tapping out a combination of dots and dashes on the key, if done correctly the equivalent letter will display on the small LED matrix. If you want to experiment with your own Microbit Morse code trainer, you can download the hex file I used here.

Once that was in place and tested I decided to update the way in which the box transmitted its Morse code messages. As access to an old and obsolete army base phone network is not an option, I decided to play around with the idea of transmitting Morse over the airways by utilising one of my hacked FM transmitters (a previous build of mine that you can read about here). Once installed, I not only had a means to test my Morse knowledge with the Morse trainer but also had the means to transmit my coded messages. Below is a quick video demonstration on the build at this stage.

This build was a rather fun one to do, and highlights the that fact that anything can be reprogrammed and repurposed. Unfortunately, fitting modern technology into a box that used to house old telephonic technology fro decades ago, it soon became apparent that the housing was too big and cumbersome. I therefore started experimenting to see how much I could downsize the Morse trainer section and after a couple of prototypes settled on the small box you see below. 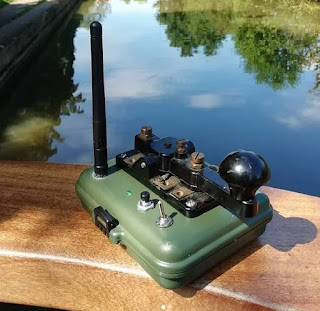 This makes it incredibly portable and adds fun to the project having it fully mobile. It still has the Morse trainer built in as well as the means to transmit messages over a variety of FM frequencies. I have been testing is a great deal with a huge amount of success and interest from the passing public. I am now in the process of making a second Morse set so the pair can transmit and receive.