December 27, 2019
Coding chatbots has always fascinated me for years and during that time I have created a number of chatbot projects with varying degrees of success.

It wasn't until I exhibited one of my simpler yet more successful chat projects called Woggle at a science fiction convention that I started to realise that putting a sci-fi spin of things greatly increases a project's popularity. For those interested, you can see Woggle in action and follow the links to chat with it yourself: https://www.youtube.com/watch?v=skrpZBU0VIs

Whilst at the show I took the time to visit the other exhibitors, one of which were a group of Star Wars droid builders and they kindly gave me a tour and breakdown of the robots they had brought with them that day. It was these people that suggested that I put one of my chatbots into a droid's body and we all agreed that this would make for an interesting project indeed. However, as I am not skilled in the art of droid building, this quickly became a problem. I was lucky enough though to meet James Bruton at another show shortly afterwards who suggested re-purposing a toy to help solve my droid building problem.

Now I have a young son, who like his friends are Star Wars crazy and so I didn't have to wait very long before a broken droid toy came my way care of one of his friends. This toy happened to be a BB8 droid of a decent size, perfect for housing a Raspberry Pi that I was planning on using to run a bespoke version of Woggle. Once again another problem decided to surface as it soon became apparent that the round bodied droid can struggle at times to house a square Raspberry Pi board and its components, so I had to get a bit creative with BB8's insides. 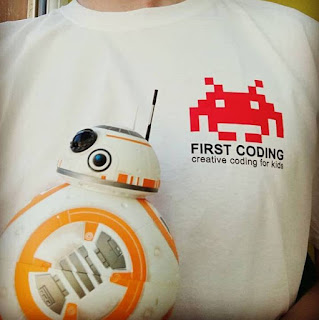 It wasn't long before the project started to take shape and I could hold a semi-decent conversation with BB8. As well as the conversational aspect to him, I also coded the droid to perform basic tasks like streaming radio and Ham radio websdr which I thought would compliment things rather nicely. As with my more recent chatbots, BB8 utilises a simple SQLite database in order to learn from the conversation he has with people. This means he can improve on the responses he gives by himself without my help.
Here is the short video of the finished project...

This has been such a good project to teach myself new skills. Sometimes it's a good thing to be pushed outside your comfort zone and if I hadn't then I wouldn't have met some really nice people.

So what's happening with this project now? Well, BB8 and I have started visiting schools in the Salisbury area to give talks to children on programming and toy hacking. The response has been absolutely amazing though I keep it a secret that on the inside BB8 is partly held together with tape!
BB8 Chatbot Interactive Pi Zero Raspberry Pi