December 31, 2019
This week's weekly game jam theme is titled Lost in Space and after working on a game for a few days, I've submitted my game Shoot for the Moon. Here is evolution of the game from sketch to concept. Those wanting to dive straight into the game can do so here. 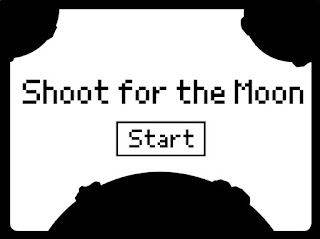 All my little games start with my sitting down with pencil and paper. I first sketched a couple of space themed ideas but the one I thought would be the most fun to build involved a space craft harpooning objects in order to propel itself through space.

The next step was to prototype the idea, so I put together a few shapes and from there was able to build the main mechanics of the game. Even at this early stage of development I could see the motion of the player didn't quite work as it either needed drift so that when the harpoon was detached, the player continues to glide for a short time in the direction of travel (similar to Asteriods), or the player needed to fight gravity, again allowing the player to continue moving once the harpoon had been disconnected. 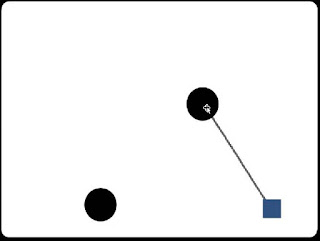 I decided to go with the latter, mainly because it was the easier option given the timescales I'm working with but also by adding a gravitational element I would be able to add a character or planet to the bottom of the screen. The obstacle will be constantly pulling you down, preventing you from remaining stationary in the game. 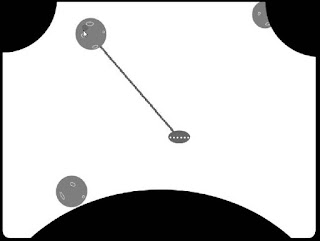 I think the planets add a really creative border to the game and offers an element of risk during game play.

Below is a short video of the progression of the game's evolution, complete with game play at every stage. You can play the game here.