August 22, 2019
After my previous projects experimenting with the building of a Microbit synthesiser I wanted to pursue the coding random tunes further as it’s something that’s always interested me. There are two projects that I’ve enjoyed listening to and I wanted to take inspiration from them. The first is a site called Machine Conversations that allows you to listen to the conversations of elevators by hooking into their API and translating the data into simple sentences. You can listen here. The second is a site that does something similar, generating poetry from the data generated by Manchester’s many services. It’s called Every Thing, Every Time and you can check it out here.
With these examples I decided to generate my own tunes using a similar method, the traffic. My village of Shrewton is suffering from an ever increasing traffic problem, so I thought I would join the cause in my own little way. Let’s gather some traffic data from a few of the busiest roads in the village and convert it to something randomly tuneful. You can listen to the Shrewton village’s traffic tunes here. 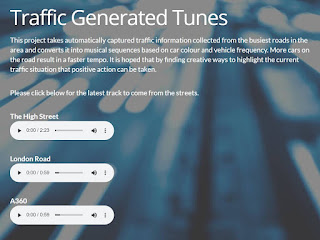 I chose to host it on a free site anonymously as I’m toying with the idea of pinning up the URL on the village’s notice board. This would hopefully encourage people to visit the site out of curiosity and help raise awareness of the problem Shrewton is facing.
Shrewton Synthesizer Tone Traffic Calming Wiltshire